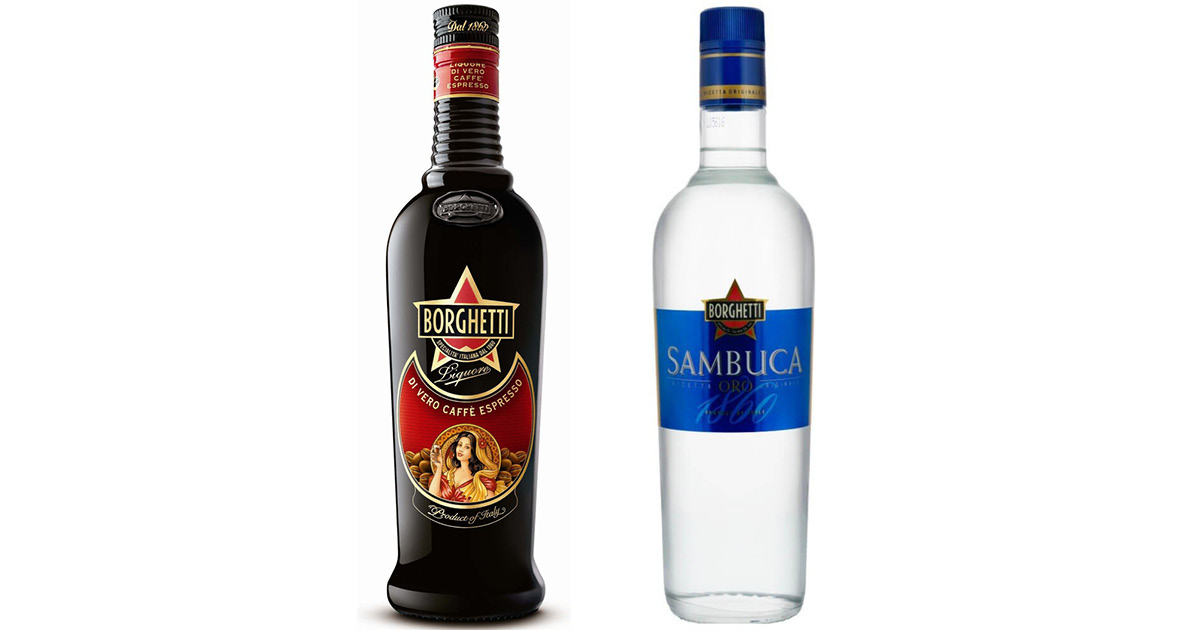 Caffè Borghetti is a coffee liqueur containing 25% alcohol by volume. It is produced in Milan, Italy at the Fratelli Branca Distillery. Bernandino Branca created the recipe in 1845, and the liqueur has been produced according to the original recipe, passed down through the generations, and kept a secret. There is only one custodian of the formula, who personally measures out the aromatics during the production process. Its flavor is typically Italian, characterized by a special blend of the best coffee qualities from different regions of the world, prepared in huge coffee pots. It won a Bronze medal at the 2015 San Francisco World Spirits Competition.

Sambuca Oro Borghetti is a sambuca containing 38% alcohol by volume. It was created in 2001 after the research carried out by Fratelli Branca, and in slightly more than ten years it has already managed to become one of the leading brands in its category. Sambuca Oro Borghetti derives its unmistakable taste from star anise with magnificent magnolia-like flowers as well as a careful distilling process which lends crystal-like purity to the product. It won a gold medal at the 2016 San Francisco World Spirit Competition.

When Risella began to be distributed by the marketing and sales organisation Conaxess Trade Finland at the beginning of 2015, Risella’s sales development was flat. The task of Conaxess Trade was to increase sales and refresh the brand image. A new growth story was sought by a complete brand renewal and developing Risella’s product range according to existing consumer trends.

The Spanish Ebro Foods acquired Risella from Raisio in 2004. Ebro is the world’s leading rice producer.

”In only two years, Risella was changed from a dated rice brand to a completely new and modern player that sells innovative and healthy products. We are very satisfied with the skills and enthusiasm of our local distribution partner Conaxess Trade Finland with regard to renewing the Risella brand and product portfolio. By listening to the wishes of Finnish consumers, we have developed Risella’s product range to correspond to current wishes for easy and healthy foods. We are constantly developing new products, with which we want to inspire people to enjoy balanced meals,” says Julio Campos, Ebro Foods Regional Sales Manager for Northern Europe.