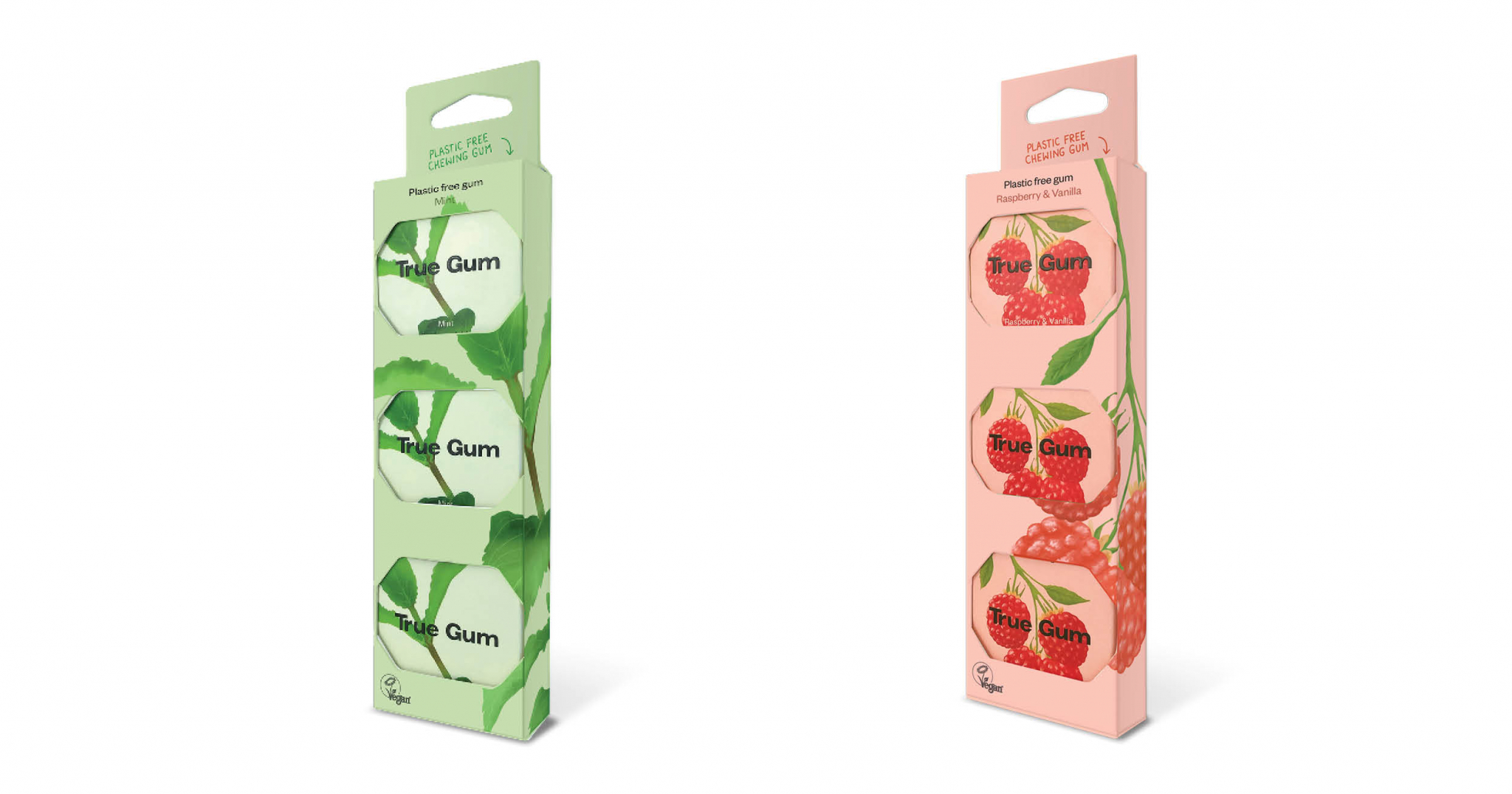 It was autumn in 2016. And in the kitchen of a small Copenhagen apartment, the two university friends Morten and Peter were making dinner together. It was an evening like any other and the friends prepared a healthy meal based on wholesome organic ingredients. After finishing the meal, Peter opened up his bag, pulled out a pack of gum and offered Morten a piece.

This particular chewing gum had a liquid centre and green neon-coloured stripes running through it. Looking back at their empty plates that just minutes ago had been filled with fresh wholesome vegetables, the oddly looking neon-coloured chewing gum suddenly became quite a stark contrast. The organic meal was simple, natural and easy to understand. But this gum was exactly the opposite.

That realisation sparked a discussion between the two friends. Did any of them know what chewing gum was made of? And why didn’t it dissolve on a street or in nature like any other food product eventually would? They quickly realised they didn’t know the answers to these questions.

These unanswered questions settled in the back of their minds. Over the next few days, both Morten and Peter spent a lot of time researching how regular chewing gum is made. To their surprise, they learnt that regular gum has a synthetic petroleum-derived rubber base. It contains the same plastic ingredients also found in plastic bottles, glue and car tires. So they agreed that regular gum wasn’t something they wanted to keep chewing on. Instead, they wanted to find out if it was possible to make gum that was better for the environment and the chewer.

Shocked by their discovery, but not willing to give up on their chewing gum habits, Morten and Peter decided they wanted to make their own plastic-free gum alternative. This was anything but a quick fix and turned out to be a much tougher process than first anticipated. More than 1.5 years later, and after countless hours and failed attempts in the small home kitchen, they perfected the True Gum recipes and True Gum became a reality.

We may request cookies to be set on your device. We use cookies to let us know when you visit our websites, how you interact with us, to enrich your user experience, and to customize your relationship with our website.

Click on the different category headings to find out more. You can also change some of your preferences. Note that blocking some types of cookies may impact your experience on our websites and the services we are able to offer.

These cookies are strictly necessary to provide you with services available through our website and to use some of its features.

Because these cookies are strictly necessary to deliver the website, refuseing them will have impact how our site functions. You always can block or delete cookies by changing your browser settings and force blocking all cookies on this website. But this will always prompt you to accept/refuse cookies when revisiting our site.

We fully respect if you want to refuse cookies but to avoid asking you again and again kindly allow us to store a cookie for that. You are free to opt out any time or opt in for other cookies to get a better experience. If you refuse cookies we will remove all set cookies in our domain.

We provide you with a list of stored cookies on your computer in our domain so you can check what we stored. Due to security reasons we are not able to show or modify cookies from other domains. You can check these in your browser security settings.

We also use different external services like Google Webfonts, Google Maps, and external Video providers. Since these providers may collect personal data like your IP address we allow you to block them here. Please be aware that this might heavily reduce the functionality and appearance of our site. Changes will take effect once you reload the page.

This website uses cookies to improve your experience while you navigate through the website. Out of these, the cookies that are categorized as necessary are stored on your browser as they are essential for the working of basic functionalities of the website. We also use third-party cookies that help us analyze and understand how you use this website. These cookies will be stored in your browser only with your consent. You also have the option to opt-out of these cookies. But opting out of some of these cookies may affect your browsing experience.
Necessary Always Enabled
Necessary cookies are absolutely essential for the website to function properly. This category only includes cookies that ensures basic functionalities and security features of the website. These cookies do not store any personal information.
Non-necessary
Any cookies that may not be particularly necessary for the website to function and is used specifically to collect user personal data via analytics, ads, other embedded contents are termed as non-necessary cookies. It is mandatory to procure user consent prior to running these cookies on your website.
SAVE & ACCEPT